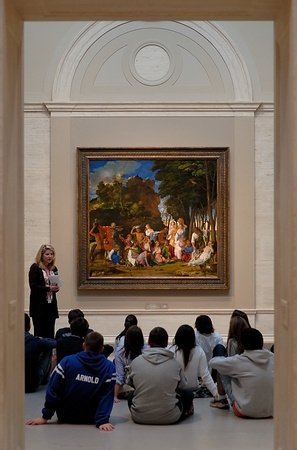 "The Feast of the Gods" is certainly one of the stars of the Gallery with its many assets, including the contrast between the colors on canvas. The painting was commissioned to Giovanni Bellini, who is recognized as the greatest Venetian painter of the 15th century, by Alfonso d'Este (1486-1534), the Duke of Ferrara, around 1512. It was to be the centerpiece of the Duke's private art gallery, known as a studiolo, as part of a five-painting project. Bellini completed his work in 1514, two years before his death. The rest of the paintings came from Titian and Dosso Dossi, with the former contributing three. The Feast of the Gods was altered twice during that period—once by Dosso to modernize the design, and later by Titian to harmonize the Dosso rework with his other paintings in the studiolo.

For the longest time, there was a mystery as to who did the painting and why there were several styles present in it, which was also fueled by Giorgio Vasari in his "Lives ofthe Artists," where he reported that `Bellini failed to finish it before he died and that it was Titian who completed it'. The following note in webexhibits.org/feast/index.html explains how the truth came out in 1950s when researchers at the National Gallery of Art took x-ray photographs of the Feast of the Gods: "They discovered glimpses of a previously unknown composition. Not only did they find Bellini's landscape hidden behind Titian's, they also found an extra hidden landscape that had been long forgotten, as well as other interesting changes." No doubt, the lady in the picture was telling Arnold and company about the mystery behind the Feast.

Reading webexhibits.org/feast/index.html further on the significance of this Renaissence masterpiece, "Fifty years later, Titian, who had been Bellini's student, was acclaimed as `the father of modern painting.' The Feast of the Gods is unique because it combines on a single canvas painting by the greatest Venetian painters of the fifteenth and sixteenth centuries. Each complements the other and each contributes to the whole. Bellini's array of deities, set as a classical frieze, is painted with striking patches of color, brilliantly accentuated with dazzling contrasts of light and shade. As a background, Titian creates a breathtaking landscape, again using color, as in his Danaë, not to highlight but to unify and intensify the total effect."