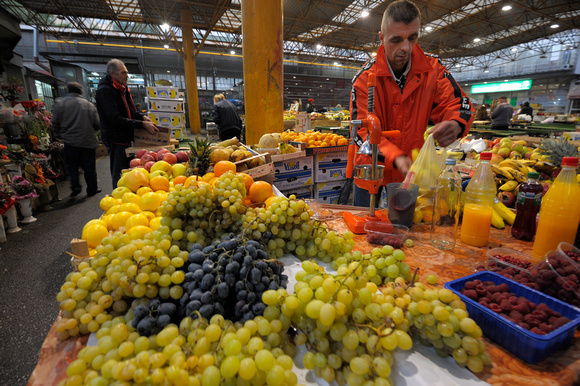 A fruit-stand in the market near the famous Baščaršija... Customers do their final shopping in the late afternoon hours of the first day of Kurban Bajram.

During the Siege of Sarajevo, Pijaca Markale was shelled twice. The first time was on 5 February 1994 when 68 people were killed and 144 were wounded. Despite the confusion created by UNPROFOR, the International Criminal Tribunal for the former Yugoslavia (ICTY) concluded in January 2003 that the massacre was committed by Serb forces, sentencing the Serbian General Stanislav Galić to life imprisonment for crimes against humanity.

The second massacre occurred at around 11:00 am on 28 August 1995, killing 43 and wounding 75. Republika Srpska authorities have tried to fog the public opinion with constant denial. The ICTY trials again determined that the five rounds of mortars were fired from Bosnian Serb territory, either Lukavica or Mount Trebevic. This attack on civilians triggered NATO air strikes on Bosnian Serb forces, which eventually led to the Dayton Peace Accord.