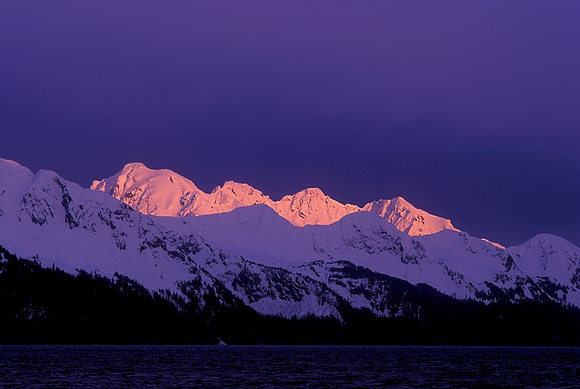 This one is looking east to the Resurrection Peninsula from Seward, population 3,000 and no McDonald's in town. Resurrection Bay offers a rich sealife habitat and it is the home to otters and stellar sea lions among others. The stellar sea lions have been significantly reduced in numbers over the last ten years with no clear culprit determined so far. The entire coast was seriously hurt by the Exxon Valdez oil spill in the 1990s.

I was lucky to witness a spectacular alpenglow on this cold April evening, around 22:00 hours. This was the last in a series of images before the light faded away. Two days later, it snowed for the first three days of May.

Spot-metered off the bright peaks and opened up by 2/3 stops...