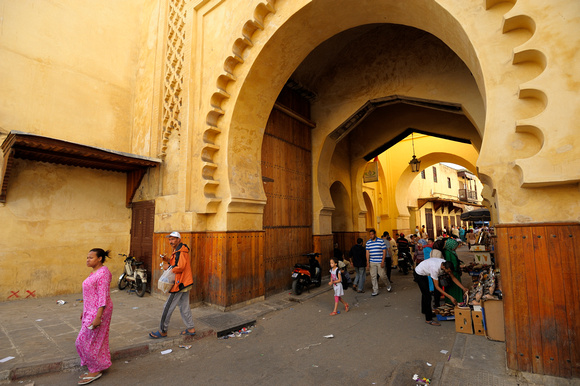 Achieved during the founding of the Fez Jdid, this majestic gate with two arches was originally called Oyoune Sanhaja (Sources of the Sanhaja, one of the three major branches of the Moroccon Amazighs). Its current name comes from the blacksmiths' guild. The market which now leans on Bab Semmarine once housed the silos of the city of the Merinids. Its decorative elements are a testimony to the delicateness and finesse of the Merinid architecture. This monument attests to the care that master craftsmen took to decorate even defensive structures.

Flanked by two imposing towers (borjs), this gate retains its impressive stature. Until now, it has an exterior facade with a semicircular arch, couples with a decorative multi-lobed arch. A band, full of geometrical knot work, surrounds the gate.

The entrance of this building was covered with vaults until it was redesigned at the beginning of the 20th century to facilitate automobile traffic.