First Saturday after the Wenchuan Earthquake in Yonghe Temple, also known as the Lama Temple, which is one of the pillars of Buddhism in Beijing... Understandably very crowded, with the worship thrones and incense smoke setting the solemn mood... I was surprised to see that most of the visitors were fairly young.

The Wenchuan (Sichuan) Earthquake on May 12 has cost the lives of over 68,000, leaving more than 350,000 injured and 5 million homeless. About 20,000 people are still listed as missing. By the decree of the State Council, a three-day national mourning was in effect between May 19-21, a first time for the "ordinary people" of China.

Formerly an imperial palace, the temple was converted to a lamasery by Emperor Qian Long in 1744. Serving the Yellow Hat Sect of Lamaism, it has housed large numbers of monks from Tibet. 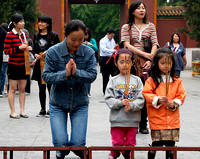