The Escalante area was mostly flat 135 to 155 million years ago. It was closer to the equator and had a much higher annual precipitation. Plant life consisted mostly of cycads, ferns and conifers. Dinosaurs roamed the area.

Floods and erosion would uproot trees and deposit them in flood plains and along sand bars. In order for them to petrify, the trees had to be buried quickly with mud and silt to eliminate oxygen which would cause them to deteriorate.

Later, volcanic ash covered the area. Ground water rich in silicon dioxide and other chemicals saturated the buried trees. The reds, browns and yellows result primarily from compounds of iron while manganese and other minerals account for the purples and dark blues.

Through a mineralization process at the cellular level, aided by silicon dioxide acting as a cementing agent, the wood became petrified. This process took millions of years.

The Escalante Petrified Forest lies within the Colorado Plateau, which has been uplifting for approximately 40 million years. It is about 1,800 m above sea level now. These upheavals of the earth's crust break the petrified logs into irregular sections and expose them to the forces of erosion. After being exposed, the logs are further cracked and broken by the effects of freezing and thawing of water that seeps into the cracks of wood. (Notes by the Park Service) 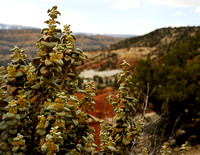