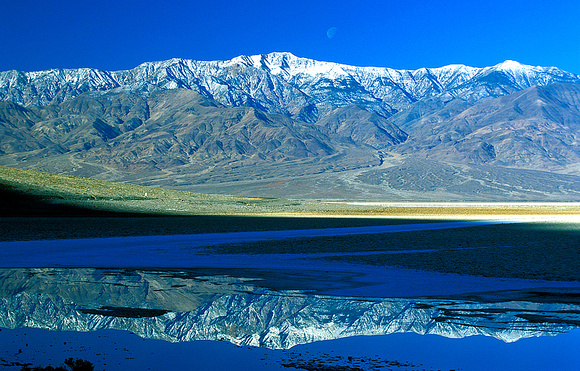 Death Valley was a major hurdle for those who were seeking short-cuts on the way to California during the gold rush of the mid-1800s. This is looking at the Telescope Peak of the Panamint Range standing tall at 3,315 m., from the lowest point in North America at 85 m. below sea level. This place can be hot at any time of the year. The record is 57-degree Celsius, measured in 1913.

An early surveyor marked the pool where the reflection is as Badwater when he saw that his mule would not drink the water. It's mostly sodium chloride. In other words, the water here is saltier than the sea. But unlike what many would think, there is life even in Badwater. One can see insect larvae, as well as water beetles live on patches ofalgae. Some pickleweed grow on the edges.

I was with a fairly old gentleman when I took this picture. He was shooting with a large-format camera, bolted on a wooden tripod. Helived out of a VW Beetle, custom-designed to be used as a make-shift bedroom. No home, no address. It turned out he had spent time in Istanbul in 1950s and could speak some Turkish. He showed some magnificent nature photographs; 4x5-inch slides, that is. We made friends and met several times during the time I spent in Death Valley on assignment.

The photograph itself is one of several I shot with Velvia and many with Provia, though the latter responded much better to the light. This particular one at 200 mm, mirror locked-up due to the critical 1/15-sec shutter speed... It was some time between 8:00-9:00 am, a relatively late hour for Death Valley. But I had to wait for the moon to come down. I hope to be back on a February 1st some day.

Provia 100F responds much better to this kind of light. I tried to tweak the color balance with post-processing in this Velvia shot. Specifically, I reduced the blue a little, as well as the green cast on the slopes, which is typical of Velvia. It was some time between 8:00-9:00 am, a relatively late hour for Death Valley. But I had to wait for the moon to come down.