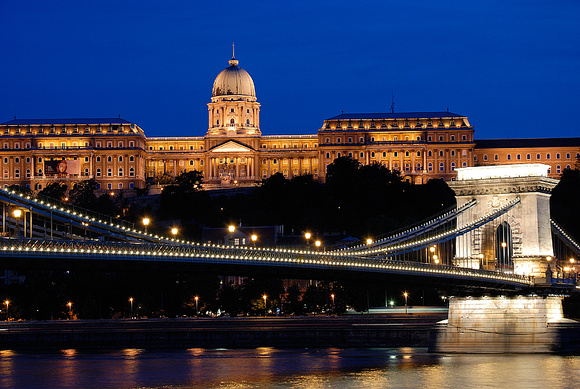 This view is looking to the Castle Hill from the banks of Danube in Pest. On top of the hill lies the Habsburg Royal Palace, which now also houses the Hungarian National Gallery. The dome was originally designed by Alajos Hauszmann in neo-Baroque style. The palace was destroyed as was most of the city during the 47-day siege of Budapest by the Soviet troops in early 1945. The rebuilt dome fashioned a change in style to neo-Classical. The Szechenyi Chain Bridge was the first permanent one connecting the two sides of the Danube. Designed by the English engineer William T. Clark in 1839, the 202-meter long bridge was opened in 1849, and it is also representative of the neo-Classical style. The bridge's steel structure was strengthened in 1914. Towards the end of the siege in 1945, it was destroyed by the German forces retreating from Pest to Buda. The rebuilding was completed in 1949.

Here is a trivia from Wikipedia: “In 2001 aerobatic performer Peter Besenyei flew upside down under the bridge, a maneuver that became a standard in air races today.”