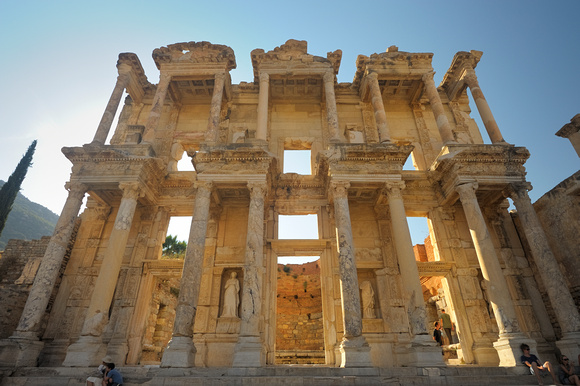 The Celsus Library was built between A.D. 100 and 110 by Gaius Iulius Aquila for his father, the senator Tiberius Iulius Celsus Polemaeanus. The library can actually be interpreted as a heroon which was built over the burial chamber of the deceased.

A flight of nine steps at the façade, flanked by statue bases led to a vestibule from which the actual library room could be entered. The aediculated architecture of the impressive façade contrasts with the brick construction of the building's interior, although the floors and walls were revetted with marble. The library was destroyed during an earthquake in around A.D. 270 and was not rebuilt. In the late antique period the remnants of the façade served as the rear wall of a street fountain. The re-erection took place during the years 1970-1978 with the financial help of Anton Kallinger-Prskawetz.