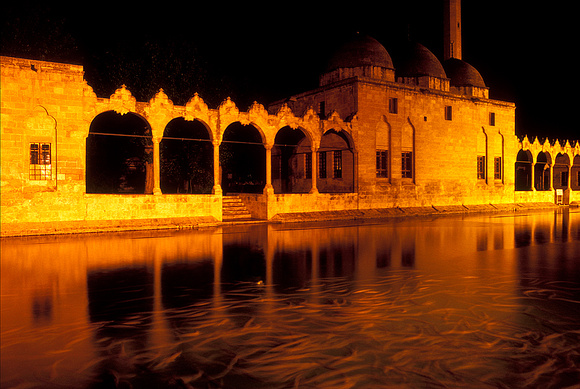 Coming back late from a trip to Atatürk Dam and Harran, and unable to escape some dinner commitments, I could get out for photography only after dark. Balıklı Göl area is a city park that receives heavy loitering for almost 20 hours/day. This particular night with heavy rainfall turned out to be quite memorable thanks to the conversations I had with the locals during the several hours I spent taking pictures.

Rızvaniye Mosque was built by the Ottoman governor Rızvan Ahmet Pasa in1736. According to the legend, Abraham was thrown from the citadel onto a big fire where the 150x30 m pool is located now. The firewood turned into carp and springs burst to form the Pool of Abraham. The fish is considered sacred, and tasting them will bring eternal damnation.