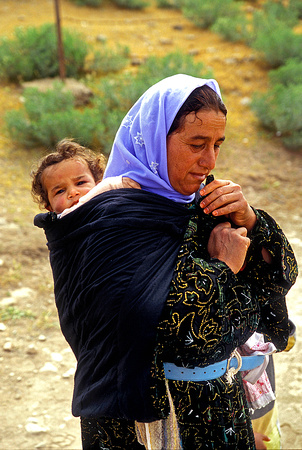 When I was in Şanlı Urfa for a national engineering conference, the organizers arranged a tour of the environs, including Harran, which has been inhabited for 6000+ years. The ruins that date back to the thirteenth century arrival of the Mongols are protected by barbed wire, possibly in response to past vandalism. At some point, a woman with three kids walked towards us from the old village. We noticed that the little one she was carrying on her back was about to fall off because the clothing that wrapped the baby was becoming loose. When warned about the situation, she put things back in order with her hands and teeth, murmured something in Arabic (translated by the daughter concealed beside her), and walked on. The whole affair took place in a rather short time-period, and this is one of the few snapshots I took.