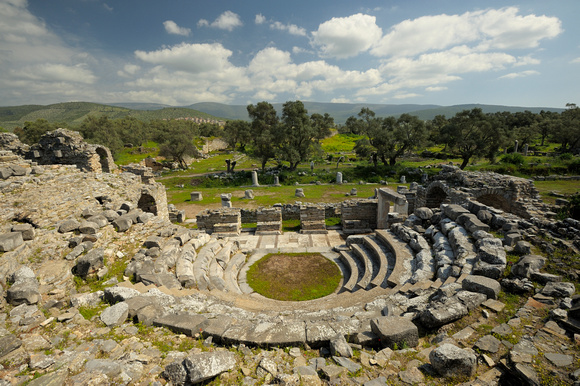 The bouleuterion (TR: meclis binası) rises near the southwest corner of the agora just behind the south stoa.

The original building was probably erected in the 4th century B.C. when the city council (boule) was constituted, but the present arrangement dates to the 1st century A.D. Its ground plan is rectangular (21.8 m x 25.7 m.) and its row of seats (cavea) has the shape of a three-quarter circle. The function of the building also changed in this period: it was given a circular central space, seats and a proscenium, and was used as a small covered theater.

The original frons scaenae was pierced by three doors and was decorated with two orders of columns with niches. The cavea was divided into three sectors by stairs and lower steps were separated from the upper by a corridor (diazoma). The seats were furnished with lion's paws at the edges of the steps. The space reserved from the chorus (orchestra) was paved with tiles in local white and red marble. A system of passages, corridors (ambulacra) and stairs, connected with the outside, led to the side entrances (parodoi), thereby granting access to every part of the building.

In the age of Hadrian, while other works were being carried out in the agora, the façade of the bouleuterion was embellished with rich sculptural decoration and stairs giving access to the galleries (tribunalia) were added.