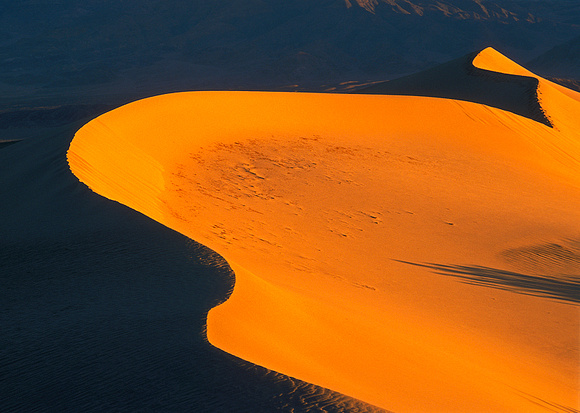 Sharp and Glazner [1] write the following about the geometry of Mesquite Dunes: “Dry loose sand can accumulate at a repose angle of about 34 degrees, but it prefers a slope closer to 33 degrees. Once deposited at 34 degrees, dry sand soon slumps, forming a lobe off flowing sand, called a sand avalanche, that comes to a rest at an angle of 30 to 33 degrees. Big sand avalanches generate a low-pitched moan that resembles the sound of the horn on a distant diesel locomotive.” The photograph was taken shortly after sunrise from the top of a neighboring dune using a telephoto lens. The creosote bush is there with its shadow. Climbing the lee face of a dune is not an easy task because avalanche sand is loosely packed, and 33 degrees is always a steep climb no matter what.

Continuing with Sharp and Glazner [1], “The longitudinal crest of a transverse dune ridge is not always straight in the overhead view, but can curve and meander. The crest also commonly rises and falls gently between broad, rounded summits and wide-open saddle.”