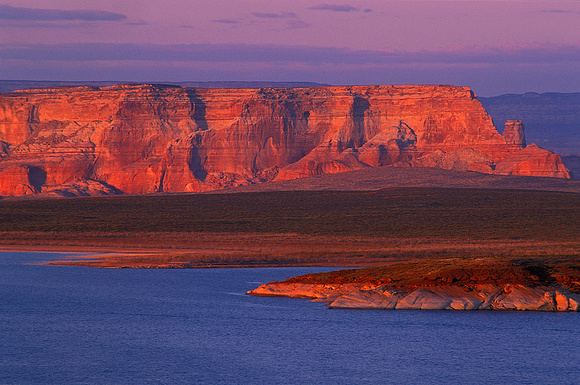 When the Glen Canyon Dam became operational on the Colorado River in 1963, the consequences were "monumental". Close to one-hundred major side canyons were flooded, Anasazi cliff dwellings were submerged... It was the price to be paid for the urban sprawls in the desert southwest. What replaced the canyons and the ruins was Lake Powell, the second largest reservoir in USA. Hikers were out, boaters were in...

The global warming-induced droughts over the last several years have forced all but one of the boat ramps on Lake Powell to be closed in 2006. It's anyone's guess whether the water level in the lake will be sustainable in years to come. So it seems that Glen Canyon is making a come-back, and what you see in this photograph may soon become history.

Dams are no longer built in the USA, but in other parts of the world, we continue to sacrifice our natural and cultural heritage.