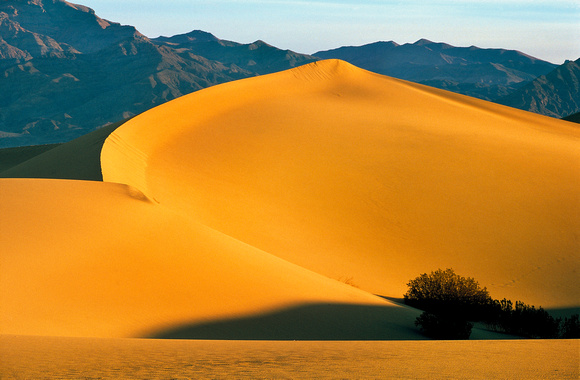 Quoting Sharp and Glazner [1]: “The Mesquite Dunes are low mounds or ridges of wind-blown sand that move like waves in the wind. The wind transports sand grains in three ways: by rolling or sliding them along the mound, by making them hop, and by impacts of hopping grains as they come back to the ground and hit the surface grains, sending them jerkily creeping over the ground. Hopping is by far the most effective and efficient mode of transport for sand, but impact creep enables wind to transport larger particles than it can move either by hopping or rolling. In highwinds, hopping grains form a visible curtain a foot or more thick above the dune’s surface. Wind-blown sand does not travel in suspension; it hugs the ground.”

Indeed, one could barely notice the wind subtly sweeping the sand right above the ground when I took this photograph right after sunrise. The creosote bush is also present here, enjoying the shadow of another dune. In the Mojave Desert gallery, one can notice the stronger impact of wind in a photograph from the Dumont Dunes.